For the 2017 season, the PioNerds competed with a robot named Hope. The team had a very successful, winning the Iowa Regional and earning a spot in the St. Louis FRC World Championship.

FIRST Steamworks is the game for the 2017 FIRST Robotics Competition. The game is played by two alliances of three teams each. Their robots compete on a field by scoring wiffleballs which represent fuel into a simulated boiler which transfers the generated steam into an airship in the middle of the field. Each alliance has one airship, which they pressurize with steam from the boiler and load with plastic gears from the field. At the end of the match, robots can hang on team-supplied ropes attached to the airship for additional points.
More Information can be found on Wikipedia 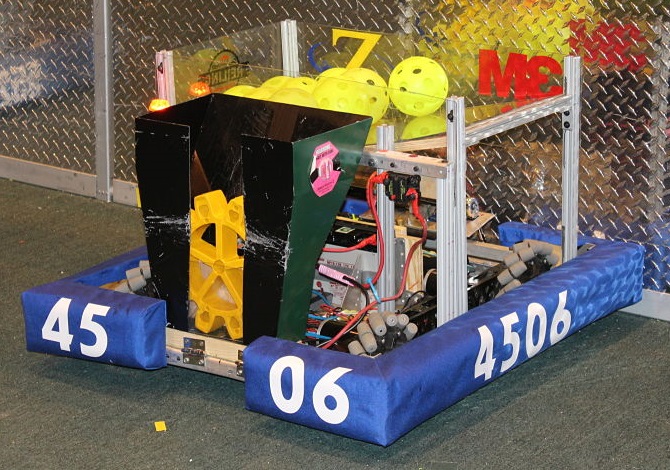 This was a year of firsts. The team came into the season with a new overall strategy. Instead of heving the mentors being in charge of the team, the students appied for leadership positions so that they could really take charge with different aspects of the team. The students really took their roles seriously and had tremendous success. The team took the time to completely understand the game and how to earn points. This was the first season the team entered two regionals. In the Duluth regional on week 1, the team learned a lot about the game and what the robot could do. Unfortunately, the robot broke the rope mulitple times. Despite scoring well, the team was not selected for elimination rounds. In the Iowa regional, the team took what they learned in Duluth and devised a new and improved rope. The team was selected for elimination rounds in a regional event for the first time in team history. This weekend was also the start of spring break and many students, including the drive team could not stay for the elimination rounds. With only 7 team members remaining, the team rose up to the task and won the Iowa regional. The team then went on to competed in FRC Championship Tesla division in St. Louis. The team competed against team from across with globe. The team did well, but were not selected for the elimination rounds.