For the 2018 season, the PioNerds competed with a robot named Rampage.

FIRST Power Up is the game for the 2018 FIRST Robotics Competition. The game is played by two alliances of three teams each. The teams are trapped in an 8-bit video game and use Power Cubes to defeat the boss. Teams defeat the boss by owning the scale or their switch, playing power ups and climbing the scale tower.
More Information can be found on Wikipedia 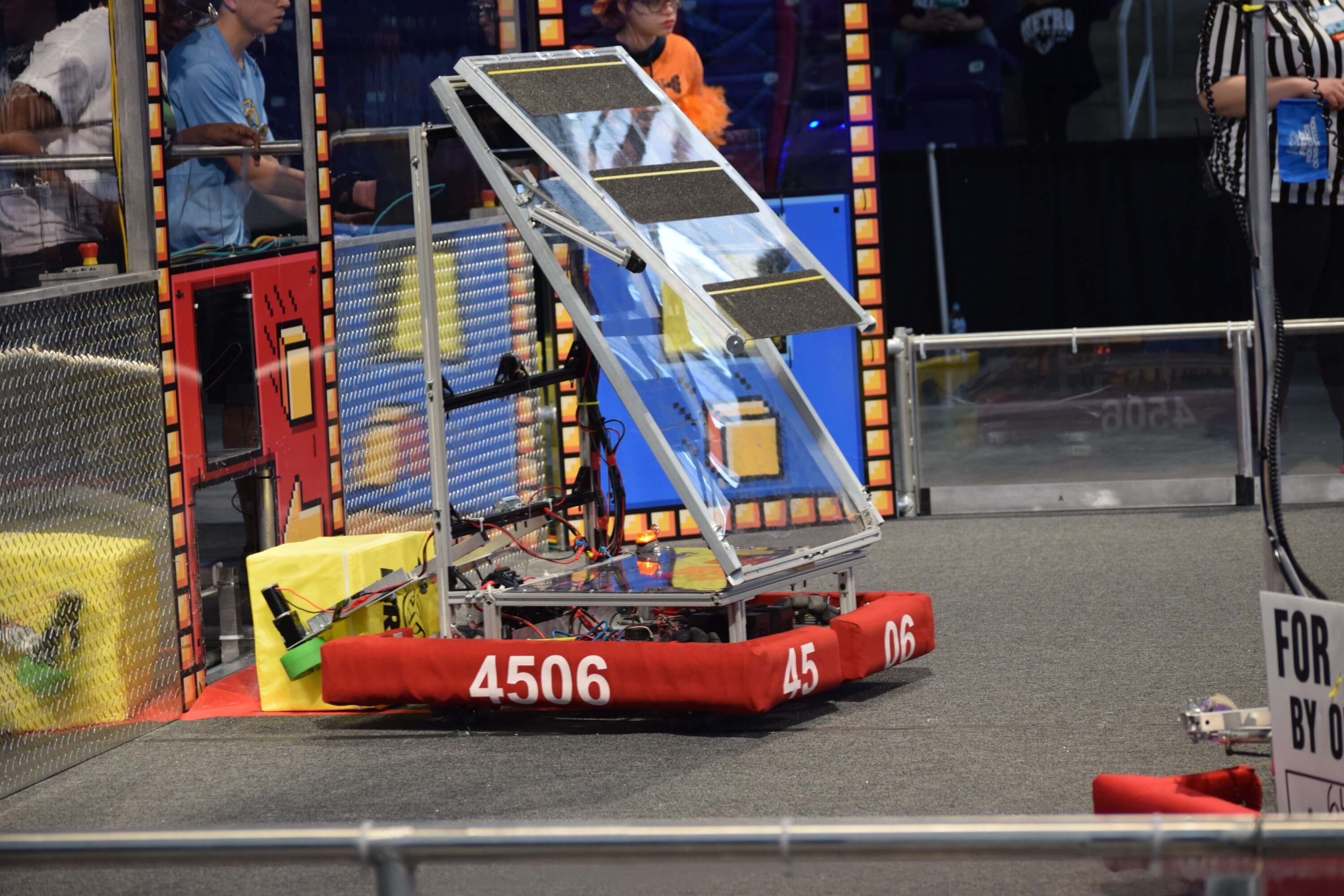 The team got an early start in October, and worked with new team members to learn about all the tools in the shop, robotics parts, Solidworks, Java and try to learn to strategize mathematically. Also students worked the phones to drum up sponsorships. The team prepped and prepped to try to get a solid footing going into build season.
The main premise of this years game seemed simpler, just have the scales tipped in our favor more than our opponents. However, there was immense strategy in the nuances of the game. The team tried to come up with an effective strategy in order to be successful in the game. In one of the brainstorming sessions, the team had a brilliant idea, our robot would deploy a ramp so that two other robots could drive on top of ours.
The team worked and worked and with all the good ideas being implemented on the robot, but ran into our first major hurdle, weight. On bag up day the robot was 12 pounds overweight. In between bag day and our first competition, the team worked to get the weight down, sacrificing well thought out designs for anything that would make it lighter. A new grabber was built and tested that would be a great weight savings. And we’d put it on once we got to Duluth.
In Duluth, we discovered very quickly that the weight shaving was not enough, students worked until the pit administrators kicked them out of the pits trying to get the weight under the limit. In our first match, our autonomous robot raced across the field and severely damaged our lighter, less sturdy grabber. The robot was never able to grab a cube the rest of the way. In addition to this, the robot was having trouble deploying it's ramp mechanism. The motor was too slow and the pneumatic cylinders were irreparably damaged which made deployment impossible. The robots wasn't really able to do much of anything and as a result we were not selected for elimination rounds.
Now, based on that, it would have been easy to just forget about robotics not come in and fix things and invest our time in other things. But that’s not what happened. These dedicated students came in and redesigned, worked and tested. And as a result, the robot was much improved. The team went to Iowa with a renewed sense of hope.
In Iowa, the team quickly discovered in the practice matches that the lifter system was just not going to work, so it was ditched and focused on scoring low. This made an incredible difference and our robot became a scoring machine. The robot was able to put 4,5,6 and 7 blocks into the scoring areas each match. Unfortunately, even though our ramp was deploying well, our alliance teammates were just not quite able to drive on top of us or unwilling to try. All in all, Iowa was a success and it felt even sweeter to have bounced back from the disappointment in Duluth. And it was all due to the dedication and endurance of the students.
The team also spend time during the summer promoting FIRST and robotics. They attended the Robots Invade the Plaza at 3M, where they showed off the robot and allowed children to drive the robot. The team also submitted Rampage in the State Fair which they earned a Red Ribbon for mechanical design.